Jamie Carey, Director of the Great Lakes Chorus, has a degree in Vocal Music Education and a Masters degree from Michigan State University. His choral directing and vocal coaching experience spans over 30 years. 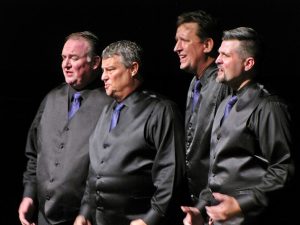 He sang with Full Chord Press in 1993, Firepower in 1995, Dexters Alibi in 2011 (Southwest District), Majestyx in 2012, and Upper Deck in 2017. Jamie has also competed at the International level with Full Chord Press in 1993 and 3 times with Firepower in 1995, 1996, and 1998 before the quartet retired in 1999. He competed with Majestyx in 2014 and 2015, and with Upper Deck (pictured to the left) at Nashville in 2016, Las Vegas in 2017, and Orlando in 2018. Also in 2018, father time has allowed Jamie to sing as a senior. In his very first senior quartet MonTAJJ (pronounced montage), they were crowned the Pioneer District senior champions and representatives to the International Senior Quartet Competition in Nashville in 2019 and Jacksonville, Fl. in 2020.

Jamie has also coached numerous choruses and quartets over the years. In addition to coaching, he teaches a performance singing/vowel class and has worked with both the Southwest District and Pioneer District sharing this class with choruses, quartets, and at district sponsored events.

The Great Lakes Chorus invited Jamie to return as director in 2013. Since his return he has lead the chorus to district championships in 2014 and 2017 and the BHS International Competition in 2015, 2016, 2017, and 2018. We look forward to many more exciting years ahead!

Book Us for Your Event